Panda Cam from Chengdu Research Base in China. This sanctuary is home to over 100 giant Pandas making it one of the largest in China. Pandas are separated by age at the sanctuary. This live feed will show you different views of Pandas doing anything from sleeping, eating, playing, climbing and much more.

As you will see below. One camera is a video loop of live events from the previous day and another cam is streaming a current live.

About the Sanctuary: The sanctuaries(or base) is 165 acres in size. It is home to several of…

Chinas endangered animals. Such as giant pandas, red pandas, and other endangered wild animals exclusive to China. Its main focus is the conservation of giant pandas, scientific research, breeding, public education and educational tourism of Chinas endangered wildlife. It has the largest population of captive giant Pandas in the world with a population of around 220 Pandas between all bases. There are 4 Panda sanctuaries(bases) in China with Chengdu being the largest.

When are baby Pandas born? July to September is when female Pandas give birth to their young. During this time of year you will see several baby Pandas on cam. Watch them grow from birth to cubs, then adolescent and adults.

What has made Giant Pandas endangered species? Humans. Humans have accounted for the decline of the Panda population. Agriculture, logging, and infrastructure development has taken away the natural habitat of the Giant Panda and given them no place to live.

Are Mei Xiang and Tian Tian Giant Pandas? Yes Mei Xiang is a Giant female and Tian Tian is a giant male Panda both living in captivity at Smithsonian’s National Zoo in Washington, DC, United States.

What does a Panda like to eat? BAMBOO! Yes and that’s actually all they eat. It gives them all the nutrients they need.

​To learn more about what they do at the China Conservation and Research Centre for the Giant Panda (CCRCGP) you can visit panda.org.

Read more
panda cam with replay of the previous day on a loop pandacam with current live stream
Register(top of page) or Login:
8 Comments
newest
oldest most voted
Inline Feedbacks
View all comments 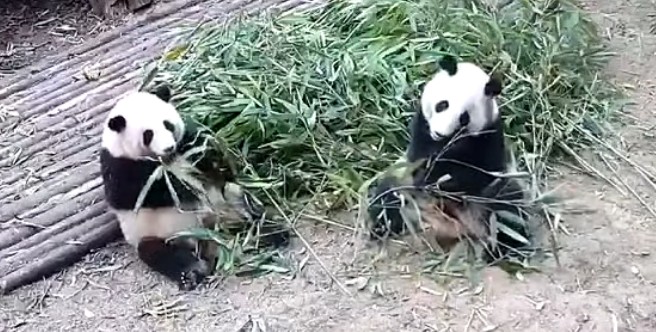 Not fit for man or beast right now even though pandas are well-suited to this type pf weather. BRRRRR.!

Thanks, but I've already signed up.

You are going to send email to
Move Comment